You are here: home » denial of credit

OUT NOW ON AMAZON! 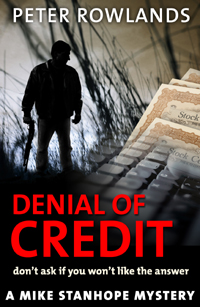 Denial of Credit, Peter Rowlands’ third mystery drama, picks up the threads of its predecessors, Alternative Outcome and Deficit of Diligence, following the story of likeably downbeat journalist Mike Stanhope.

The winning ingredients are here once again. Mike gets an assignment (ghost-write an autobiography); Mike probes; and people don’t like what he’s discovering. He has to juggle high expectations with determined resistance before the picture becomes clear. There’s mystery, intrigue and the prospect of an enticing new romance, all told at breakneck pace. Mike’s reserves are tested to the limit.

Rowlands’ trademark vivid characters and lively dialogue are much in evidence, as is his specialist knowledge of the big business background. But if anything, this is an even tauter narrative than its predecessors, with darker overtones and greater moral ambivalence. The stakes are high, and the action builds to an explosive climax as Mike finally understands what he’s stumbled into.

Meet Treadwell’s former colleagues, united in grudging respect for his brusque manner, but divided in loyalty towards him. And meet Samantha and Ronnie, specialists in craft jewellery on the London markets.

As usual, Peter Rowlands weaves an intricate plot in which apparently unrelated elements interweave in ways that turn out to be satisfyingly interlinked. Through it all, Mike Stanhope tries to pick a cautious path, struggling as ever to keep his integrity intact.